Deprecated: Function create_function() is deprecated in /var/www/vhosts/westcountryriverstrust.org.uk/fishtrail.org/wp-content/themes/aarc-project/functions.php on line 262
 FishTrail » A Slave To A Marble Trout

A Slave To A Marble Trout

Last season I had the privilege to take two fantastic young guys out on our waters. For their age – and one of them could not even vote yet – they were better in casting than I will ever be. But they have dedicated their entire trip to catch a marble trout. And eventually failed. What is all the fuss about the marble trout really? Same size rainbow will give you 10 times the fight than a marble. If you dedicate your fishing day for a (big) marble only it can be boring as hell. Most of the people coming here didn’t even see the size of streamers marbles like let alone cast with one. 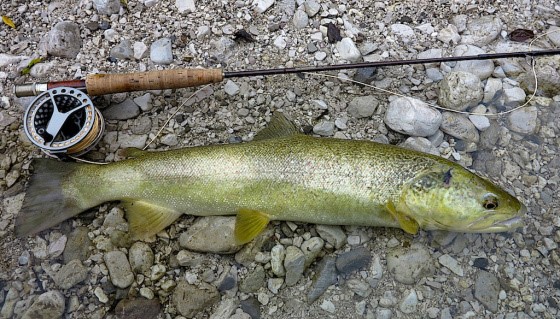 Let’s say it is interesting because a marble trout can be a bastard of a fish. It is the biggest European trout, harder to catch and … You only find it here in Soča Valley. (I am not aware if Neretva in Bosnia still has some species left) It wouldn’t be nothing spectacular if you caught a decent size on a dry fly, of course, especially in smaller waters, but most of the time you would need a big fat streamer for capital size marble.

This fish is a loner, it won’t »hang out« with friends in the same pool and it mostly feeds at late evening, night or day-break (that is when you cast just by the bank also). And bigger sizes certainly won’t eat every single day. It will rarely wait for you in the middle of the pond and they could stay in unlikeliest of places like shallow (quite) fast waters or shallow waters just before the start of the rapids. In places like that nymphs (I am not very good with that to be honest) can work wonders or smaller streamers. 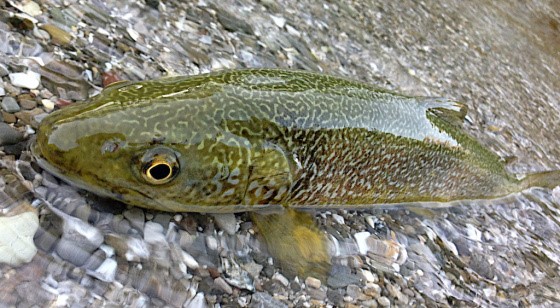 Don’t be afraid to tie on a dry fly on an 8 or 6 hook and if you spot a grasshopper on a nearby field you should put the champagne on ice and tie the grasshopper on (artificial one, yes). Don’t be afraid of rain and high waters. That is actually a good time to go after marble (but forget about size 22 mosquito). 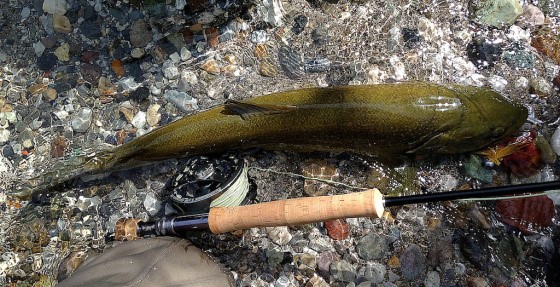 Catching a marble trout has a lot to do with scouting the waters (before the season – this is what local guides do). The fish will rarely leave its territory. Sometimes it can all change a bit after spawning. That is why Trebuščica gets a brand new package of monsters each winter because not all of them return to Idrijca after their annual »bed activity« for example. 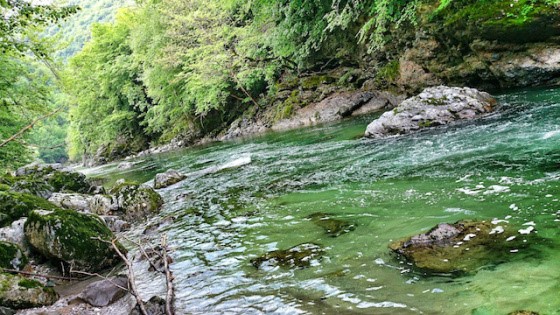 But still, after a while one should develop a sense where marble trout should be. And from there on it is just a matter of being at the right place at the right time, with the right fly, approach, cast and … Luck! The more waters you will cover the bigger the chance is to catch one. So here is a funny thing. An average tourist fisherman has actually a higher chance of catching a marble trout than an average local. Locals will mostly fish 4-5 hours per day (average outs in Tolmin Angling Club is 12 days a season only!!!), whereas tourist will be in the waters 8 hours at least. Of course if they leave average »tourist trap pools« sooner rather than later and have a proper go – anytime of the season. A vast majority of locals will be reluctant to hit the high waters in bad and cold weather, but tourists have paid good money to fish and won’t stay away. And remember that bad waters are actually good waters for a marble.

Another way to catch one is if you hunt it down. That means you should show up at the very same spot again and again. And Again. And again. Until you see a clueless fishermen with the biggest smile on Facebook holding »your« bloody fish the next day. But most of the time five casts maximum in one spot will determine your luck. Of course this is more or less a theory that works best. What is THE best way to catch a marble only the fish knows. You can also scrap all of the above if your lottery luck was accidentally used on a monster marble trout. Or if you hit a good day in the (over)stocked parts of Idrijca and Lepenica. Oh, I suppose I should tell you that those two boys caught graylings, rainbows and hybrids that day. I don’t know about you but I would call that an absolutely fantastic day of fishing even without a marble trout.

‘In Guide We Trust’