Warning: "continue" targeting switch is equivalent to "break". Did you mean to use "continue 2"? in /var/www/vhosts/westcountryriverstrust.org.uk/fishtrail.org/wp-content/plugins/gravityforms/common.php on line 1267

Warning: "continue" targeting switch is equivalent to "break". Did you mean to use "continue 2"? in /var/www/vhosts/westcountryriverstrust.org.uk/fishtrail.org/wp-content/plugins/gravityforms/common.php on line 1304

Warning: "continue" targeting switch is equivalent to "break". Did you mean to use "continue 2"? in /var/www/vhosts/westcountryriverstrust.org.uk/fishtrail.org/wp-content/plugins/gravityforms/common.php on line 1308

Warning: "continue" targeting switch is equivalent to "break". Did you mean to use "continue 2"? in /var/www/vhosts/westcountryriverstrust.org.uk/fishtrail.org/wp-content/plugins/gravityforms/common.php on line 1336

Warning: "continue" targeting switch is equivalent to "break". Did you mean to use "continue 2"? in /var/www/vhosts/westcountryriverstrust.org.uk/fishtrail.org/wp-content/plugins/gravityforms/common.php on line 3456

Warning: "continue" targeting switch is equivalent to "break". Did you mean to use "continue 2"? in /var/www/vhosts/westcountryriverstrust.org.uk/fishtrail.org/wp-content/plugins/gravityforms/common.php on line 3463

Warning: "continue" targeting switch is equivalent to "break". Did you mean to use "continue 2"? in /var/www/vhosts/westcountryriverstrust.org.uk/fishtrail.org/wp-content/plugins/gravityforms/common.php on line 3476

Deprecated: Array and string offset access syntax with curly braces is deprecated in /var/www/vhosts/westcountryriverstrust.org.uk/fishtrail.org/wp-content/plugins/gravityforms/common.php on line 3964 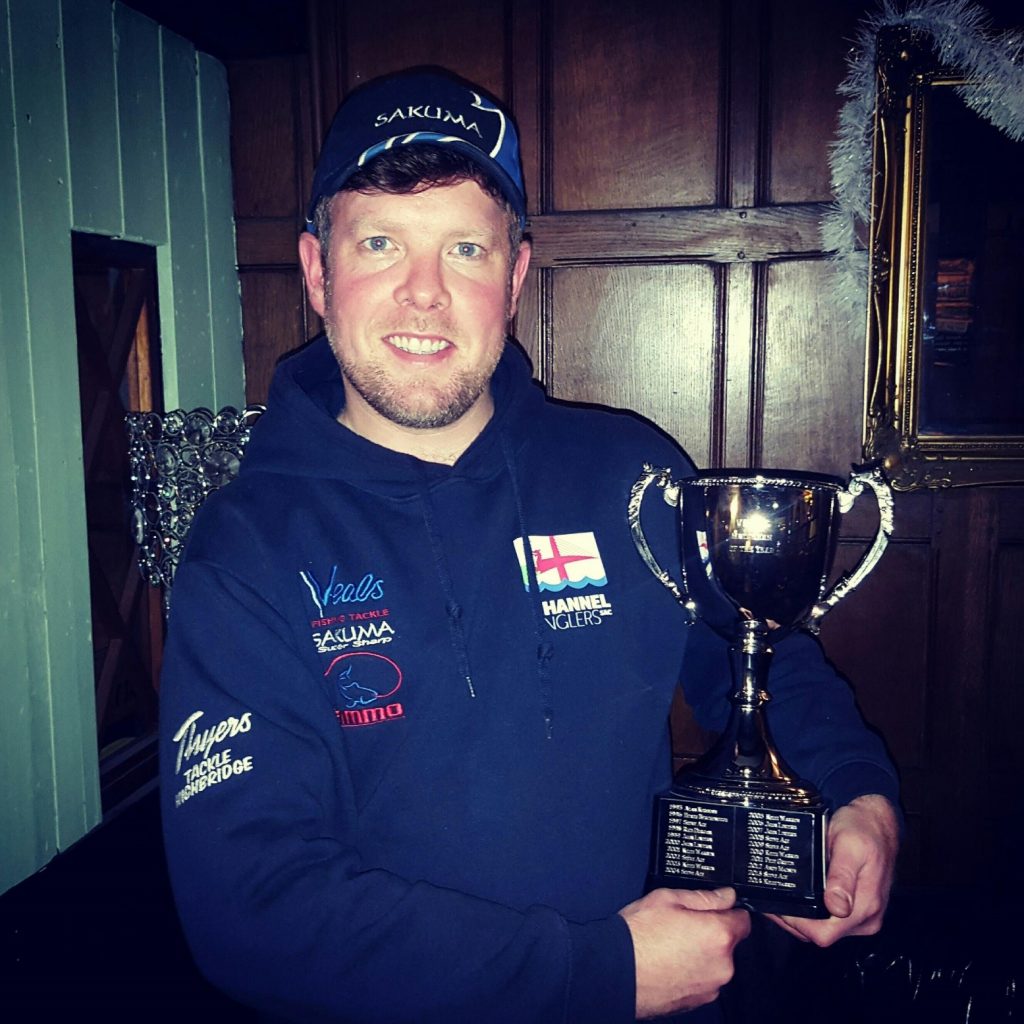 Some of my fondest earlier memories of fishing are with close family. My father introduced me to sea fishing when I was five years old, we would fish together along with my younger brother Andrew and Dad’s brother my uncle William. Often fishing from some pretty rugged rock marks in Clevedon, Andrew and I were a bit too young to actually fish but we would have a nominated rod and would claim anything that was caught from it.

This is where my obsession for angling began, we were lucky back then because the fishing locally was really good, particularly for whiting and codling in the winter months.

Fishing gives me purpose in life and I would be lost without it. Bringing immense joy not only in the participation but also in the preparation of my hobby. It can be interesting speaking to some non angling folk about our sport, hearing how astonished they are with how much time, effort and money goes into catching a few fish. Sea angling is my main focus in life, I never stop thinking about it!
I feel lucky to have so many great fishing memories. My favourite memory has to be the first time I caught Black bream on a light float setup amongst the picturesque scenery of Alderney in the Channel Islands. Awesome fun on light tackle, these bream averaged between 2- 4lb in weight and put up one heck of a scrap! 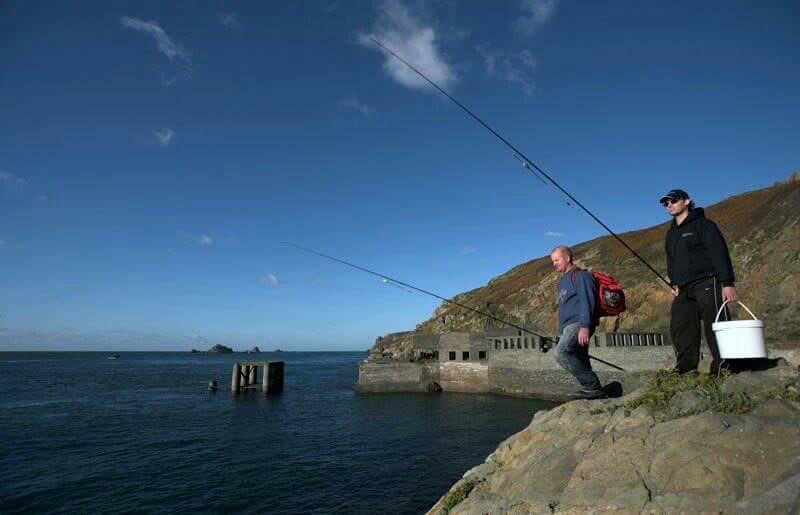 This style of fishing still goes on in the Channel Islands but Black bream of this size are very rare and no longer caught in any great numbers because of commercial pressures. I feel very fortunate to have experienced this when the fishing was good and it will be something that I will never forget.

Most of my fishing takes place in the Bristol Channel. Match fishing is one of my favourite  fishing activities, I attend competitions pretty much every weekend somewhere in the Channel. I prefer to fish for pleasure mid week when the beaches and rock marks are a bit quieter. My fishing can be very different both in location and technique. Based in Bristol we visit varied marks along the coast. Popular places to fish include Portishead, Clevedon, Weston Super Mare, Burnham, Minehead and North Devon. Seasons often dictate where we fish at certain times of year, mainly determined by the migratory cycle of the many species that can be found in the Bristol Channel / Severn Estuary. For example Cod fishing is popular in the winter, rays in the spring, flatfish and bass in the summer months.
My favourite species to catch in the Bristol Channel is Dover sole. I’ve spent hundreds of hours targeting this specie in the summer months. I like many other anglers have a real obsession with catching flatfish, especially big Dover sole which can be very hard to catch. Anglers need to have some local knowledge along with a good amount of time and patience.  Dover sole are mainly fished for in the warmer summer months around the Bristol Channel, there are some popular marks in Clevedon, Portishead and Burnham on sea. 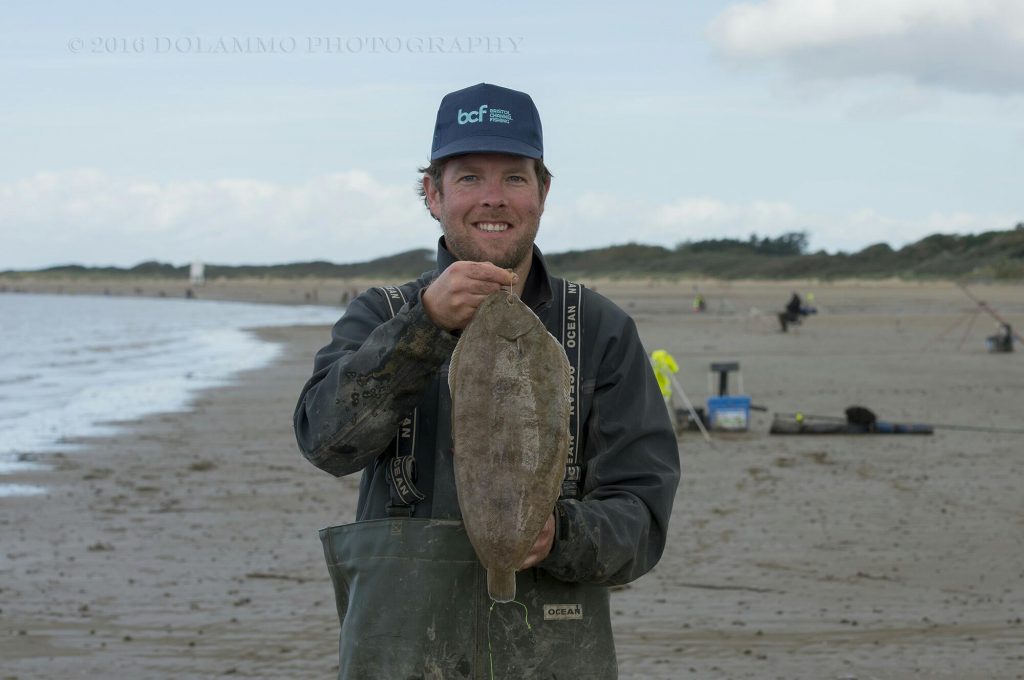 We generally target the smaller tides for sole, fishing big worm baits at close range which can often produce other species such as Thornback ray and bass. I love this style of fishing in the warmer months, you do have to be very patient but it is very rewarding when you catch one. Recording a big Dover sole is seen as a great achievement in our angling community and a goal shared by many anglers each year. 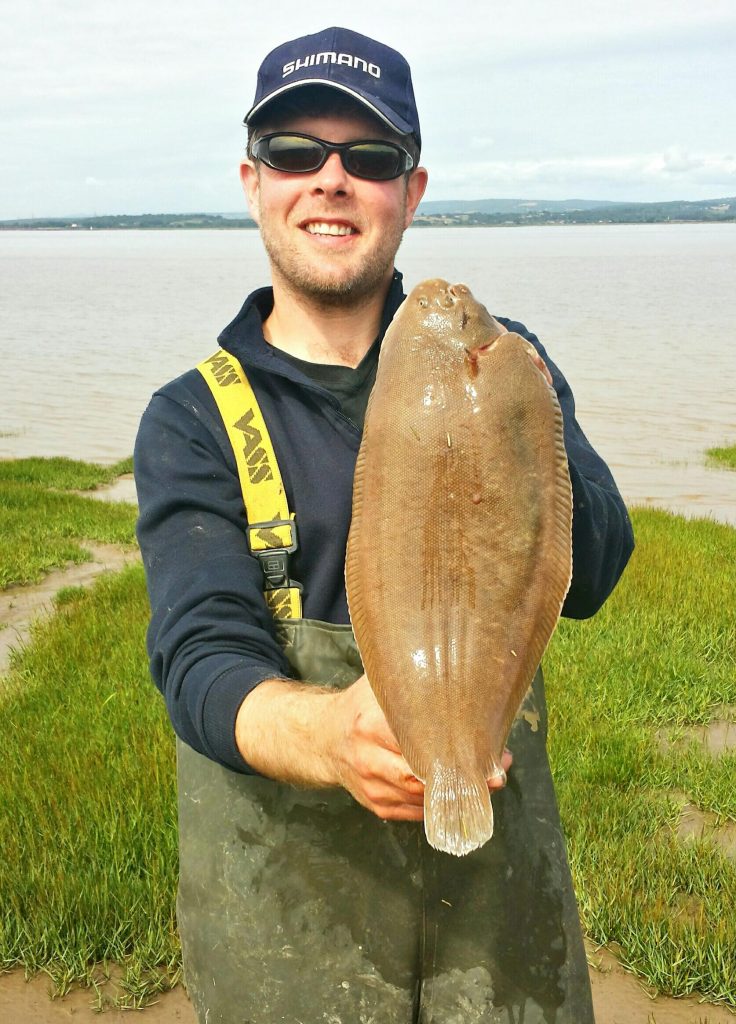 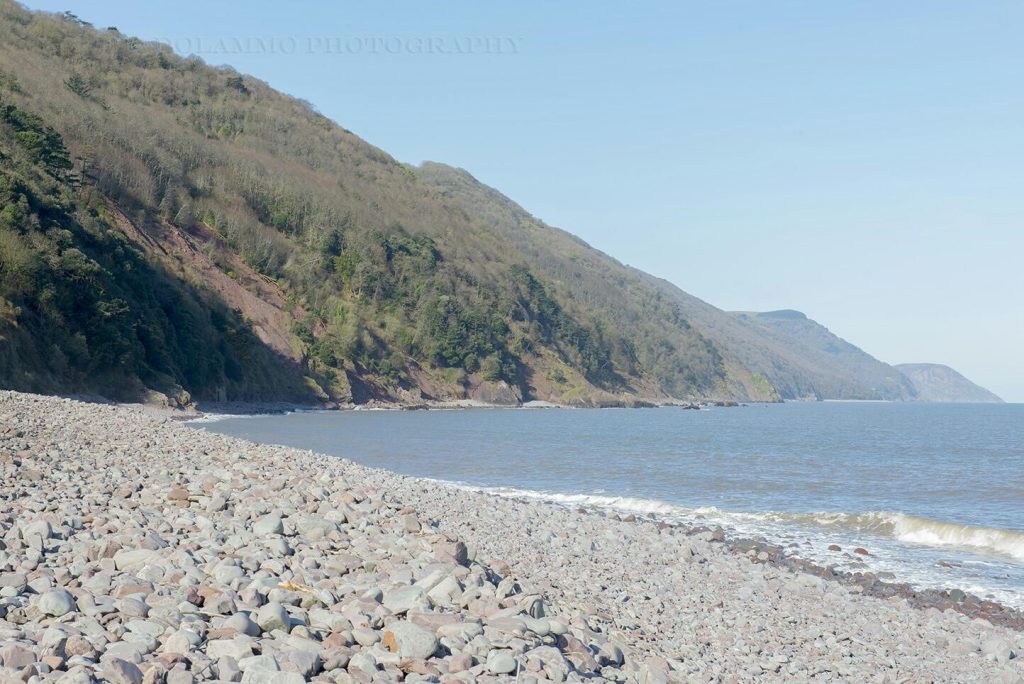 My favourite location to fish in the Bristol channel are the beaches that are in and around Porlock Bay, particularly Bossington which offers a great variety of different species. Known as the first Atlantic storm beach, a beautiful location in Somerset surrounded by hills and great views across the bay going into the North Devon coastline. This venue can hold a vast selection of different species at certain times of year – including cod, Bull huss, Spurdogs, Conger eel, Smooth hound, rays, rockling, whiting, pouting, gurnard, mackerel, pollock, mullet and even Black Bream. 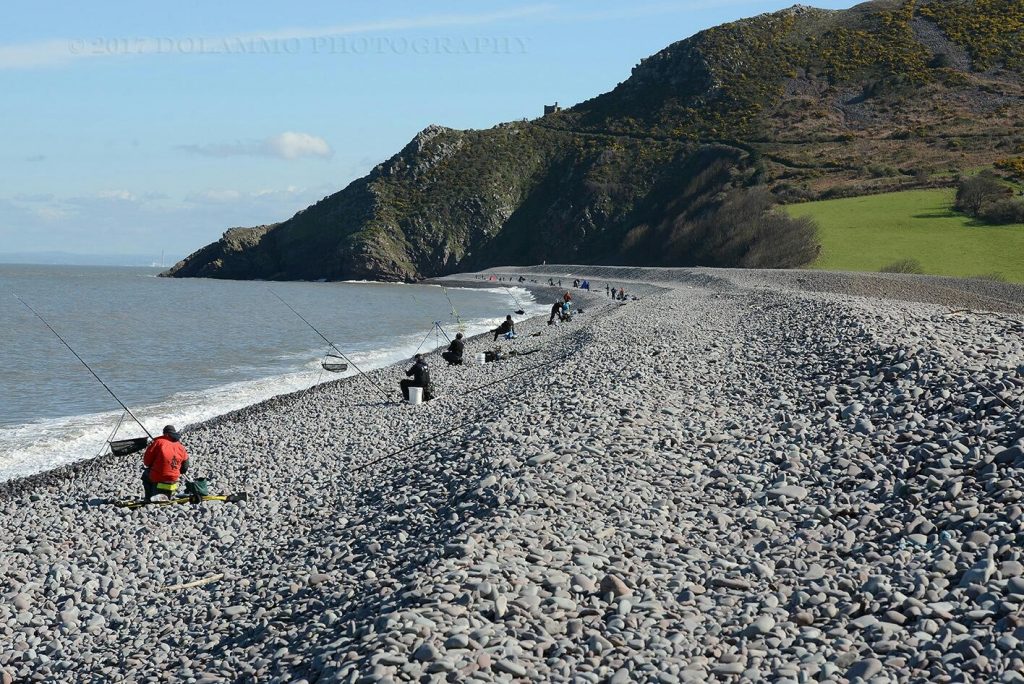 Bossington has a lot to offer, whether it’s simple beach fishing, specimen hunting or even some lighter float fishing. It’s also a great match venue, we have enjoyed some super events on this beach over the years, most recently in the Channel Anglers SAC open.

The most special thing about fishing in the Bristol Channel and Severn Estuary is the variety of marks and species. There are so many different types of venues from rock marks, muddy bays and sandy beaches. The Bristol Channel also has a vast selection of species which migrate in and out of the area seasonally, which potentially means good fishing can be had all of the year around. The muddy water in the estuary holds a rich food source in shrimp, sprat, worms and crustaceans. Ultimately a good food source is what brings the masses of fish to our shores, that coupled with a strong tidal current and the water clarity. Mud and sediment which has been deposited in the Severn Estuary gets whipped up by the tidal currents creating an almost perpetual darkness, this can encourage active feeding at all times of day including some species that ordinary would not feed in daylight. For example Conger eels, Bull huss and Dover sole normally prefer feeding in the cover of darkness in clear water. All these things combined make fishing in the Severn Estuary very special, we are very lucky having such great fishing at any time of day right on our doorstep.

If you’re thinking of species which are iconic to the Bristol Channel and Severn Estuary, it has to be cod. Over the years this species has really has put the Bristol Channel on map and it’s still a favourite for a huge majority of sea anglers. Years ago some anglers would only get their kit out when the cod were up in the estuary and the same can still be said about many anglers even now. It has a massive impact on our on the local economy, a good cod season is like music to the tackle trader’s ears. Cod seasons vary, in the 2015/16  we saw some of the largest numbers of shore caught double figure fish since the late 90s, it was incredible!

We often find ourselves trying to predict a coming season, judging by the about of mini codling the year before and then it’s fingers crossed for their safe return to the estuary. Commercial pressures out in the Irish sea can have a damning effect on the cod levels in the estuary each year. Definitely the most iconic specie for me and seemingly the most important on many levels. 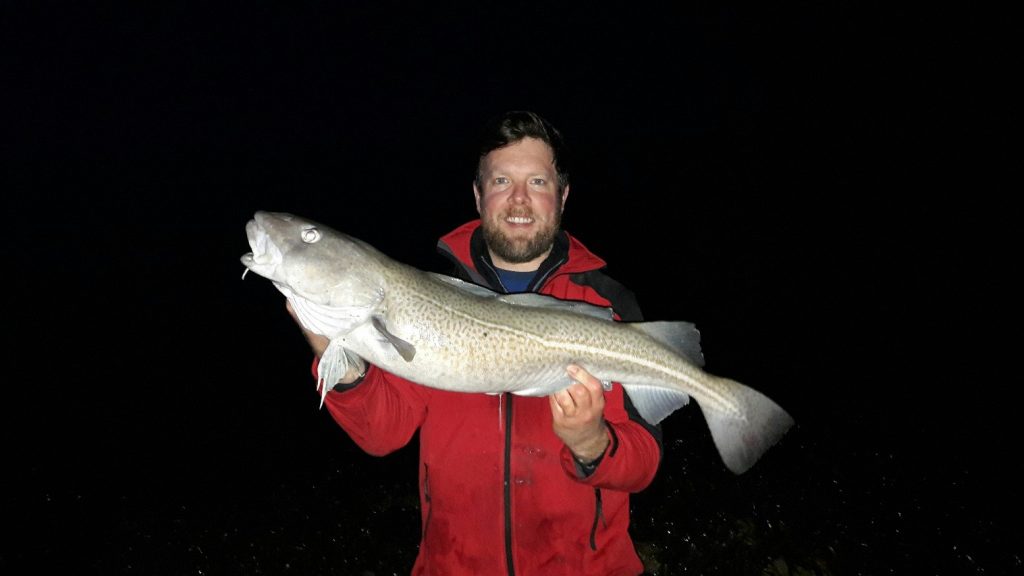 Sea angling has had a big impact on my life – whilst it has been in my life from an early age, there was a period in my late teens & early twenties when I went off the rails slightly but my love for fishing eventually set me back on the straight and narrow. Late nights drinking and early morning’s fishing don’t mix. Nothing (apart from my girlfriend) makes happier than fishing, it gives me immense focus and a positive direction in life. I think life is about a collection of good memories and I am lucky to have already enjoyed so many. Who knows where I’d be now without fishing, there seems to be lots of people out in the world lacking something positive in their lives perhaps they should give angling a go.
My advice to any visiting anglers would be: Decide on what sort of fishing you would like to try and then do some research. Information on the internet has never been more readily available, plus we have social media and there are  some great Bristol Channel groups out there who are willing to help.

Once you have reached your travel destination pop into the local fishing tackle shops, they will be able to kit you out and let you know how the local fishing has been recently. Basically you will need good recommendations on where to fish and what is needed. We are lucky to have some brilliant charter boat skippers on both English and Welsh sides of the estuary. You could also consider hiring a shore fishing guide, we have two great guide’s in Jansen Teakle (The Gambling Angler ) and Craig Butler (Somerset Angling) covering all the coast from Portishead to North Devon.

I constantly inspire to improve my angling knowledge and skills. I guess the key thing is making the time and getting out there doing it. Each year I like to set myself targets on new species to catch and some of my future goals will mean traveling further afield. Myself and a few friends are planning on fishing some angling tournaments in Europe next year, this will be really interesting as we will need to learn a complete new set of skills. My work will continue on BCF news and Channel Anglers SAC, plans have already been set in motion and we are all excited about our future goals!
Sea angling enthusiast, reporter for Bristol Channel Fishing News  and team leader of Channel Anglers SAC